Welcome to numbers in words, our website which tells you how to convert numbers to words. If you have been searching for number names, amount in words, or writing numbers, then you are right here, too. Read on to learn how to spell numbers, be it either as cardinal or ordinal, or simply numbers in English.

To change numbers to words we have to know whether the number you want to express represents a quantity or refers to the position or rank in an order of chronology, importance, size, etc.

When the numbers refers to the size of a group, e.g. hundred dollars or 101 dalmatians, in this case it is called a cardinal number, or numeral.

In contrasts, when the numbers functions as an adjective, describing the position of a person or object, then it is an ordinal, or ordinal number. For example, the third man or the fifth element.

How to Write Numbers in Words


As explained above, to write numbers in words we must know the kind of number under consideration. English numbers can denote an amount or quantity, as well as the position of something or somebody in a list.

A cardinal number says how many of something there is, e.g one, two, three dollars … , whereas a ordinal number tell the position of objects placed in order.

Examples: He finished third in the race exemplifies ranking (order). There were only two contestants refers to the size of the group (quantity).

Thus, in the former example we can see the use an ordinal, whereas in the second sentence and cardinal achieves the purpose.

For numbers in the range of 21 to 99 you add, separated by a hyphen, one, two, three etc after twenty, thirty, forty, fifty, sixty, seventy, eighty and ninety:

Note that after the hundreds comes the word “and” before the two digit numerals, e.g. two hundred and twelve. In US English, this “and” is omitted.

So, to write these numbers in words you either use or build the numeral which corresponds to the numerical representation.

For example, if you want to translate 55 in words, you simply connect fifty and five with a hyphen to get fifty-five. And in case of 11468 you write eleven thousand four hundred and sixty-eight.

In the next section of numbers to words we look at ordinals, the number adjectives so to speak. These numbers in words are equally important.

The ordinals from eleven to twenty are made by appending th to the cardinal number: eleventh, twelfth, thirteenth, …

Numbers greater than twenty are built according to this rule:

Note this exception: if the last character of cardinal ends in “y”, then the ending of its ordinal number changes to ieth. For example: ninety → ninetieth.

As you can see, you can abbreviate these numerals in writing by adding the appendices st, nd, rd and th, taking into account the aforementioned rules.

Occasionally, these suffixes are written as superscript above the number itself: st, nd, rd and th. For example: The 2nd coin or the 12th amendment.

As special case is when counting starts with zero such as in computer science. In that case, zeroth (0th) makes sense to numbers in words.

BTW: Our frequent searches include, for example:

With this you know how to convert number to words for ordinals, too.

The easiest way to find a number spelling is by enter the number in the search form on the sidebar of this page. Type x in words, with x the number you want to know in writing. Alternatively, you can enter how to spell x.

Once you are being taken to the result of numbers in words you will find the numerals along with useful information about the number under consideration. Actually, it’s more than a number to word converter. 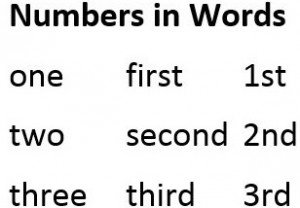 This marks the end of our information on number spelling. If you have any question left with regard to spell out numbers, just drop us a comment and will we try to answer it swiftly.

And if you are happy with our article about numbers in English, then please like us and bookmark us as Numbers in Words, and come back soon.

BTW: We also have a great site about numbers in Spanish, where you can listen to the pronunciations.